A few years ago, I had an  a-ha  moment. It was a funny, frustrating, and  humbling experience. 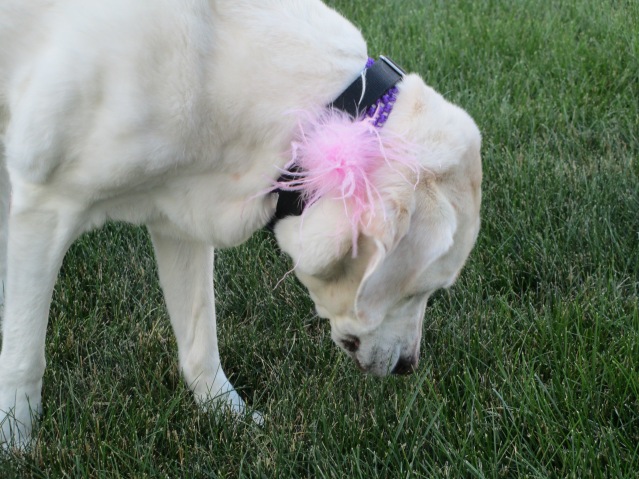 We had THE sweetest yellow lab. Unfortunately, her health took a downward spin when she was around seven and we almost lost her on  Thanksgiving. We learned the next day that she was diabetic.

Lets just say I never dreamed I would be able to give a dog insulin. In the beginning, the thought of giving her a shot made me cringe; however, I learned (and she learned) it was worth it.

What I loved most about her was her easy-going personality. Don’t get me wrong, she sometimes got into mischief, but her  fun and loving personality made up for it.

I sure do miss her.

One day I had a very unusual experience with her that totally caught me off guard.

Let me first explain that she always LOVED getting into our car. It didn’t matter where we were going, she would run outside and jump right into the backseat.

One particular day, her behavior was very different. It was time for us to leave for a vet visit. We walked to the car and as I opened the back door,  she backed up and sat down – refusing to budge. I remember saying out loud – “Are you kidding me?!”

I looked at my 80 pound dog, wondering how on earth I could lift this stubborn soul. Somehow I managed to get her front half far enough in that she got the point and jumped in.

Okay, it was a little funny at the time, but it wasn’t at all when she did the same thing after her visit.   I bribed her with everything I could think of, but nothing did the trick.

At this point, I was praying for mental strength! I opened the front door (passenger side), and she was finally willing to get in. Before I could make it over to the other side of the car, she was sitting in the driver’s seat! It made me laugh because this was so unlike her. I was just thankful that she was inside!

I have no clue what triggered her stubborn behavior, but I was thankful it didn’t happen every day.

On my way home, I began to think about my Master and how He tries to lead me in the right direction – and how I sometimes refuse to budge. And I can’t help but think how many times I push my Master out of the driver’s seat so that I can be in control. Too many times to count.

Even though that morning was beyond frustrating, it was something I’ll never forget. A lesson that spoke right to my heart. From God. ❤️