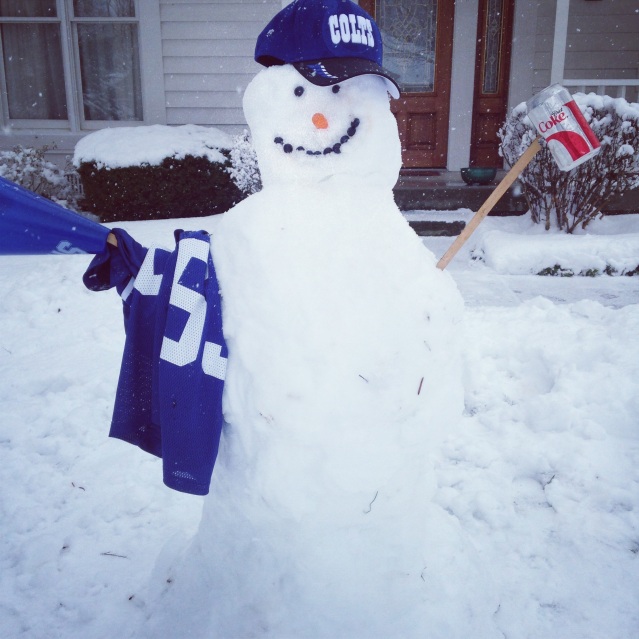 If you’ve ever seen a snow globe once it’s been activated, then you know what Indiana looked like last Sunday. It was beautiful. It was snowing so much that my husband and youngest son couldn’t keep up with it as they attempted to shovel the driveway – two separate times.

It was cold, but the bitter temps hadn’t hit us yet. Knowing that Monday would be unbearable to even step outside, we took advantage of the beautiful winter day and made a snowman (our first one together – ever!)and took a walk. We grabbed every hat, glove, winter scarf and pair of boots and long underwear that we could find to keep us from getting cold – so that we could enjoy every minute.

The snow was perfect. It was the easiest snowman I’ve ever put together. Our favorite football team had won its first post-season game (Unbelievable win – Yeah Colts!), so there was no doubt what hat we would use. The snow was packing SO perfectly, that we had a difficult time getting the eyes to stay in place. As soon as we would step back, an eye would pop out! Ha-ha. After several attempts, we had a brainstorm and created a deeper ‘eye socket’ with a screwdriver, hoping the eye would finally stay in its place.

Before we took our walk, I ran inside to change my gloves. When I came out, I laughed when I noticed that our snowman was now holding a Diet Coke can – how appropriate. This snowman was – so us! I snapped a picture, and then we headed down the street to enjoy what seemed like a winter wonderland.

When we came back to our house, Mark wanted to take the Colts hat and jersey back inside, so we swapped hats. I noticed that our little snowman now looked somewhat….naked, so I gave him my scarf rather than going back inside to hunt one down. I knew that when we went back inside this time, it would be for good.

Three days later, we f-i-n-a-l-l-y were able to make plans to go somewhere – to even get out of the house! I had just put on my winter coat when my husband asked me about his winter scarf. We were in two separate rooms, and the conversation went something like this:

Mark: Teri, Do you know where my scarf is? Me: You have a scarf? I didn’t even know that you wore one. Mark: Yes you did. I wear it with this coat. Me: What does it look like? Mark: It’s black.

Now we were both standing in the entry way, and that’s when it hit me….

Me: (Reluctantly) I think I know where it is. Mark: Where? Me: Just think about it. Mark: ? Me: I think it’s out there (pointing to our front yard). I think it’s on our snowman. Mark: TERI?!!!!!!! That’s my good scarf! Me: I didn’t know! (SILENCE) Well, I think we’re even now…. since you shrunk my new black pants. Mark: Teri! I didn’t mean to do that! Me: And neither did I! I didn’t realize that was YOUR scarf!

The good news is, what had been an “I Love Lucy” moment made us laugh. In our earlier days of marriage, my mistake would’ve created a different response – no doubt. Back in the day, I was SO sensitive AND defensive AND had such high expectations of myself and others – I most likely would’ve stomped off as soon as I realized I had made a mistake. Seriously. How such things can change like that is beyond me, but I’m thankful. I never would’ve dreamed that I would be able to find humor in my mistakes – or in others.

Take it from me – enjoy life as much as you can. Don’t beat yourself up when you make a mistake. Don’t strangle your husband for shrinking your pants. Appreciate the lesson and reminder that NO ONE is perfect. Life is too short. Live, laugh, and love.

← It Only Took a Whisper
Be an Overcomer →

2 Comments on “Take Time to Laugh!”